Banabila-Erker-Machinefabriek-Zenial is a limited vinyl release showcasing some of Banabila's diverse collaborations along with a few new tracks. Tracks earlier released are "Deep in the Forest" (from "Route Planner ") and "More Signals from Krakrot" (from "The Latest Research From The Dept. of Electrical Engineering"). "Crowds", however is an excitingly different version than the one known from the Sum Dark 12 release. The two new tracks are the opening track "Ill Rave" (with Machinefabriek) and the delicate "Drops". B-E-M-Z.clearly demonstrates Banabila's versatility. But then - most of his albums do! The impressive artwork is also very much worth mentioning: it's taken from a collection of kite aerial photographs by Gerco de Ruijter . ZoomWorld. Apart from some new tracks,"Zoomworld " is built around samples and fragments of tracks that you may recognise from Banabila's earlier work (In Other Words, 47 Voice Loops, Mltvz7). But the overall feel is quite different, as if the light has shifted completely. These new versions are created in collaboration with sound artist Radboud Mens,with whom Banabila engaged in live performance sound 'battles'. The musical result surpasses the 'ambient' genre label in any possible way, but it definitely is some of the most engaging electronic music you may encounter. 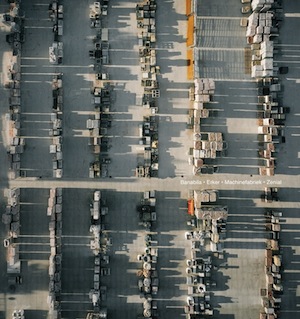